Cultivating the lives and careers of young men is important for any coach, and career success on the mat translates to the coach level. For former Millersville wrestlers and brothers George “Doppy” and Dick Doherty, both of these elements were parts of their lives. For their achievements, each will be inducted into the National Wrestling Hall of Fame in April 2013 in Stillwater, Okla.

George Doherty, the older brother of the two, wrestled at Amityville High School in New York from 1945-49 before taking his career to then-Millersville State Teachers College, where “Doppy” wrestled under legendary Marauder head coach Ted Rupp from 1950-53. George attained a career record of 30-2, including 13 pins and was an individual PSAC Champion three times.

At the end of his illustrious Millersville career, he received the Theodore H. Rupp award as the most outstanding wrestler at Millersville. He was a 2003 inductee to the Millersville University Athletic Hall of Fame. George's nominating sponsor declared the following at his induction speech: “He was by any standard the first “big time” wrestler that Millersville ever had.

“His record speaks for itself, but more than that he was a great leader and a fine example of sportsmanship throughout his career,” his sponsor continued. “In those four years, George was chiefly responsible for bringing Millersville into national prominence as a wrestling powerhouse.”

Dick Doherty followed his brother from Amityville High School to Millersville State Teachers College. Dick's high school career spanned from 1946-50, and immediately following high school, he enlisted in the U.S. Navy, where he spent a few years before heading to Lancaster County. While at Millersville, Dick also wrestled under the direction of Rupp, and he helped the Marauders achieve a four-year record of 29-7-1 while placing in the PSAC Championships twice.

After wrestling at Millersville both brothers made a more important mark in the world of wrestling, helping to begin the Berner High School wrestling program while they were teachers in the Massapequa School District in N.Y. Dick took over as head coach of Berner after George passed away in 1974 at the young age of 44.

They combined to coach at Berner for 19 years, producing two New York State Champions, 10 New York State Place-Winners and 10 Nassau County Champions. In those 19 years, they claimed 18 High School Tournament Championships and posted a total record of 182-56-2. Dick and “Doppy” were recipients of the Legents of Nassau County Wrestling Award in 1992 and 1994, respectively, and were also posthumously inducted into the New York State Wrestling Hall of Fame in 1996.

DOHERTY BROTHERS IN THE 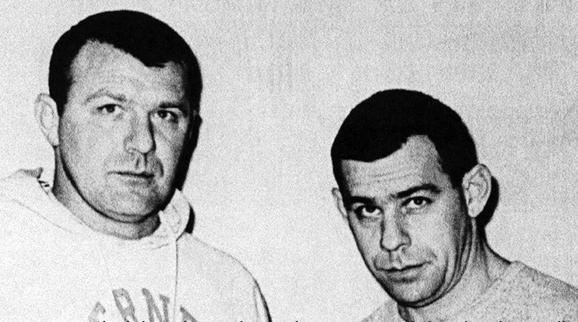