There were 559 elite wrestlers competing at the NYSPHSAA Championships across the Empire State this year. From that large group, one wrestler from Long Beach High School in Nassau County emerged victorious in a way a few could ever imagine.

In the 102-pound class was Dunia Sibomana- a 14-year-old 8th-grader with an unbelievable story of heartbreak and hope, and a journey spanning from the Democratic Republic of the Congo to the United States. Sibomana was only 6 years old when he and two family members were attacked by a band of wild chimpanzees while playing at Virunga National Park. Sibomana survived the attack, but his brother and cousin were tragically killed.

Sibomana suffered severe injuries to his lips and face, his right ear and facial muscles were destroyed, and the middle finger of his left hand was bitten off. Rangers from the national park rescued Dunia and connected him with the Stony Brook Children’s Hospital on Long Island, through Richard Leakey, a revered anthropologist and chairman of the Turkana Basin Institute. Leakey contacted his friend, Alexander Dagum, Chief of Plastic and Reconstructive Surgery at Stony Brook. He discussed Dunia’s case with Leon Klempner. Klempner is the founder of the nonprofit Smile Rescue Fund for Kids, which identifies children in under-developed countries who need facial or cranial surgeries. Dagum performed the surgeries at no charge. Sibomana’s initial surgery lasted 12 hours and involved grafting tissue and muscle from his left forearm to recreate his lips. What this young boy had to endure is unimaginable, as another grueling surgery was performed to prevent him from constant drooling and aid him in eating, swallowing and digesting his food. In total, Dunia has now had 14 surgeries, and will eventually require more as he continues to grow.

Dunia settled in the United States in November of 2015 and stayed with a host family from Hauppauge. He was enrolled in elementary school and transitioned from his native Swahili to learning the complex English language. Later, Dunia was relocated with another host family in New York City, where he continued his education and started to play soccer. Dunia has evolved from never speaking English to being an Honor Roll student.

Later, Dunia was introduced to surfing at the Skudin Surf Camp in Long Beach where he met wrestling coach Miguel Rodriguez. Afterwards, Rodriguez had his wife Marissa meet Dunia. They had recently learned the unfortunate news that they couldn’t have children. It was a short time later, that Dunia moved in with them and entered fourth grade. In 2019, the Rodriguez family filed for domestic adoption. Miraculously, Marissa learned she was pregnant and gave birth to her daughter Stella in 2021. Later, Dunia’s adoption became official, and his dad Miguel recently commented, “Dunia is a great kid, at home he is an awesome big brother and always helping change his sister’s diapers”. When Dunia isn’t changing diapers at home, he’s shooting double leg takedowns at wrestling practice.


When Dunia was an infant, his mom died of malaria and years later, his dad died of unknown causes. Dunia was accustomed to being isolated and walking around in his homeland in Central Africa, barefoot, now he owns a pair of wrestling sneakers and has a loving family. Throughout life, people feel at times they have a guardian angel. In the classic movie- It’s A Wonderful Life, Jimmy Stewart’s is Clarence and for Dunia Sibomana its Marissa and Miguel Rodriguez. They have been so instrumental in saving the life of this incredible young boy.

Wrestling coaches are a special breed and are all givers. The triumvirate of the Long Beach HS staff, head coach Ray Adams, assistant coach Leo Palacio and middle school coach Miguel Rodriguez are the epitome of positive role models. Collectively, that group have molded so many young wrestlers into men. Coach Adams stated, “Dunia is an awesome young man, kind, hard-working and humble”. He added, “He is full of energy, always willing to learn and has just started to scratch the surface in wrestling.”

At the NYSPHSAA Wrestling Tournament, Dunia Sibomana won four bouts enroute to the state championship. His improbable run began from the third-seeded spot on the bracket. He rolled through his opponents and handed a previously unbeaten wrestler his first loss of the season with a solid 12-2 major decision. He upset the #2 seed in the semifinals via a 9-3 verdict. Assistant coach Palacio, now 60, has been coaching wrestling for forty years shared his thoughts on Dunia, “He is the most coachable kid I have ever coached.” Dunia has only wrestled for a few years took his coaches advice before the gold medal match. In the hotel room a few hours before his finals match, coach Palacio showed Dunia the wrestling move that would win him the state title. In the championship bout against the top-rated wrestler, Dunia clamped on an overhead/side cradle for a stunning fall at the 1:32 mark of the first period. He was overcome by joy and jumped into his father’s arm for a touching embrace, along with being surrounded by coaches Adams and Palacio. It had the makings of a Hollywood movie and he became LB’s 17th state champion in their storied history. Dunia finished his remarkable season with 35 wins and achieved the pinnacle of high school wrestling, the coveted state title. His victory will be forever etched in the Empire State’s record book.

Following the state championship Dunia was sworn in as honorary LB Police Commissioner for a day. He got to ride in the police vehicle through town and a patrol ride along the shoreline. He’s been given a lot of attention since capturing the state title and his classmates have gravitated toward him. When asked what he liked about living in the United States, Dunia responded, “I love everything.” His life now has a semblance of normalcy, but this summer he is scheduled for an additional surgery. Dr. Dagum described the next procedure as routine and involves grafting and lifting up his lower lip. Dagum expressed his thoughts on Dunia, “He is compliant, never complains, happy and puts 100 percent into everything he does”. He added, “Right now, he is living the American Dream”. It’s doctors like Alexander Dagum that enable Dunia to live the dream. Hopefully, another successful surgery followed by soccer season and a second state wrestling title.

Dunia Sibomana has persevered, traveled a long road, crossed an ocean and traversed a continent. In retrospect, the plight from war-torn Congo to the championship has encompassed 6,680 miles. I think its safe to say- Dunia has endured a turbulent trek to the title and has found his home, it’s called Long Beach. 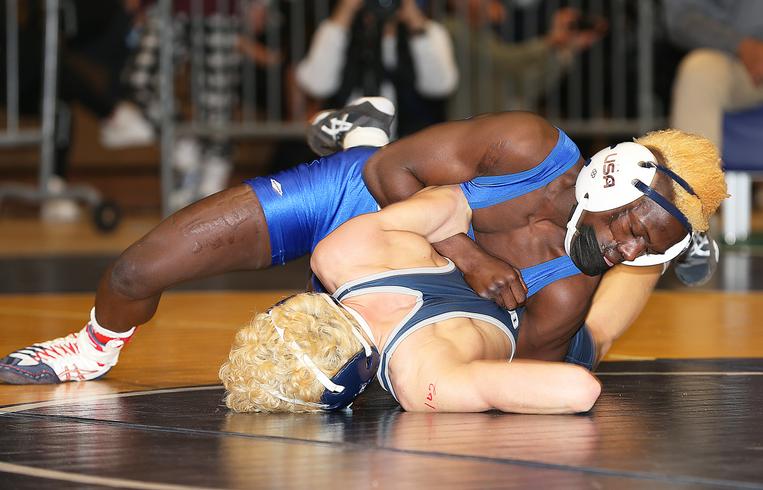 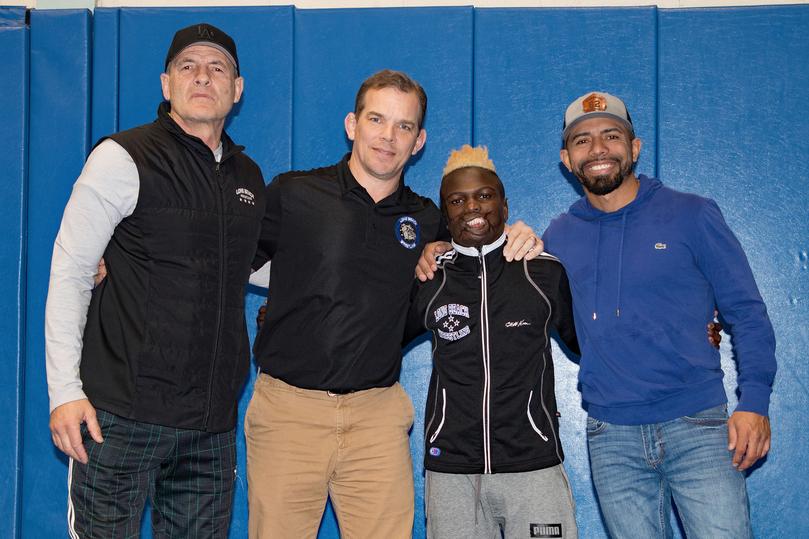 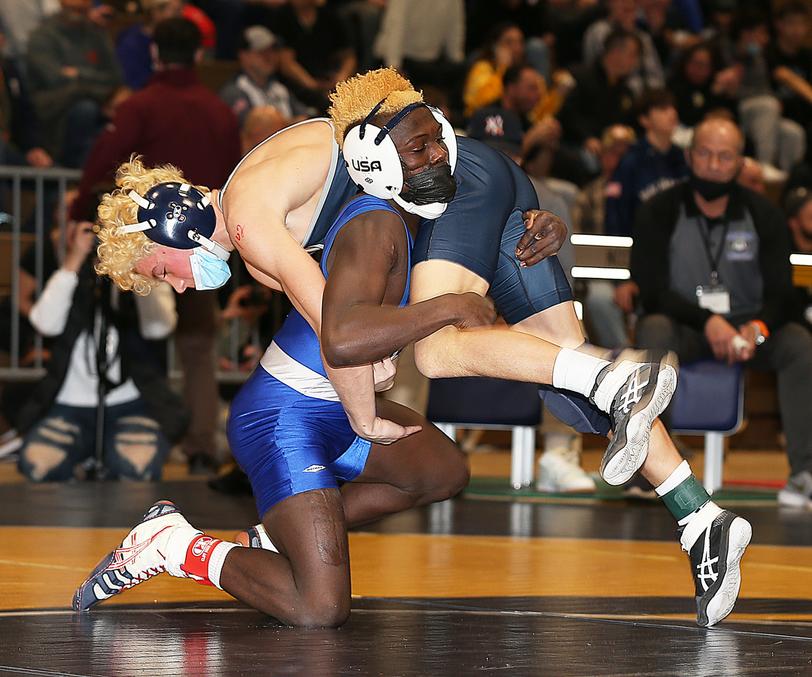 THE TREK TO THE TITLE