Mineola's Ericson Velasquez is in on his double leg takedown at 195 pounds. Velasquez won by fall in the final. 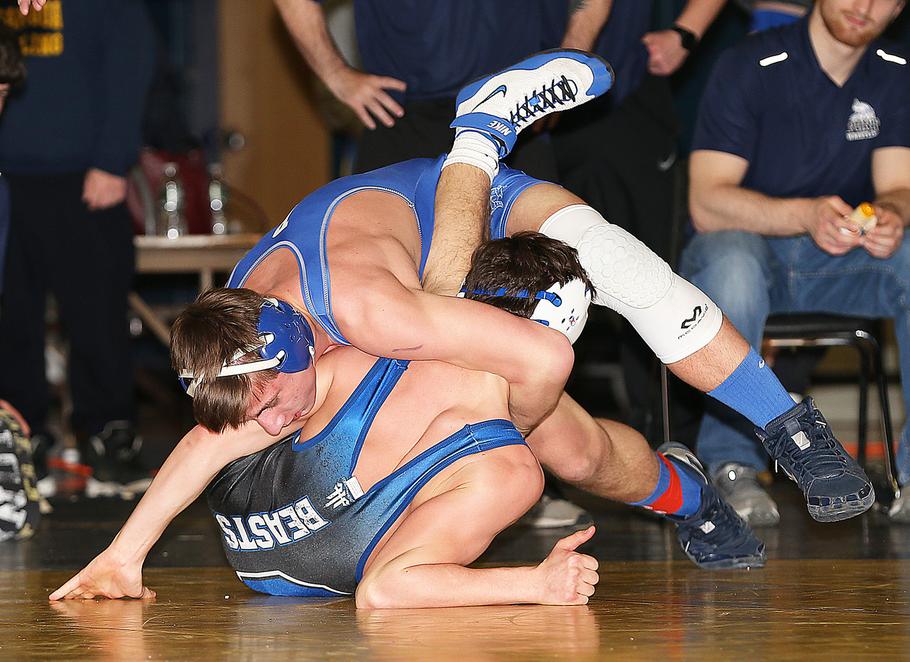 Massapequa's Chase Liardi works for a fall en route to a semifinal win at 120 pounds. Liardi went on to win in the finals as the Chiefs crowned seven champions. 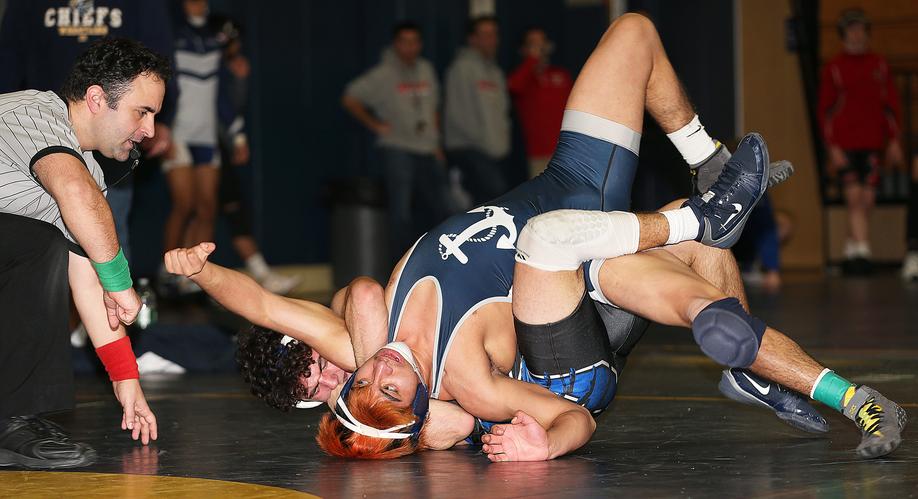 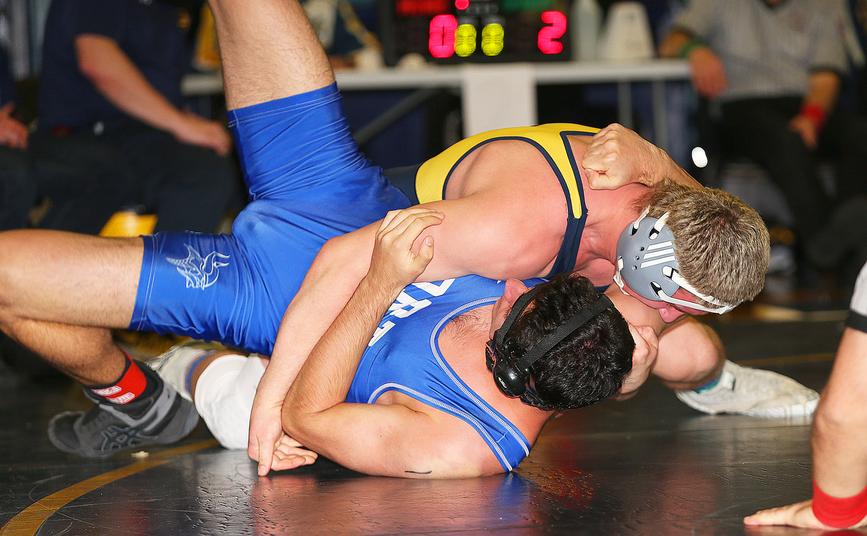 Massapequa's Anthony Conetta works for a takedown en route to a semifinal win at 126 pounds. Conetta was one of eleven Massapequa wrestlers to make the finals. 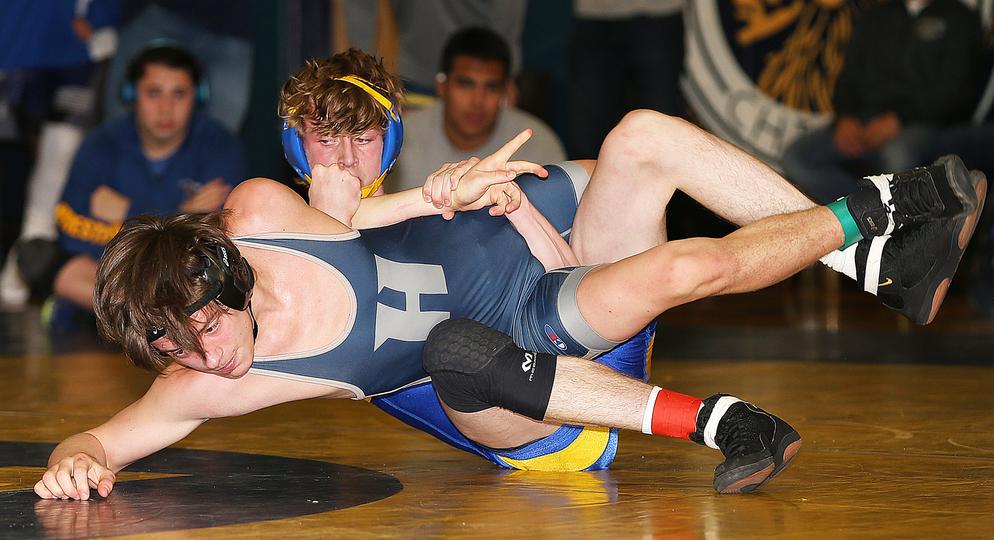 Jeremy Scutellaro of Massapequa works for a takedown. Scutellaro won the 152 pound weight.

Sewanhaka East's C.J. Riccobono works for a near fall at 152 pounds as referee Rich Petracca looks on. 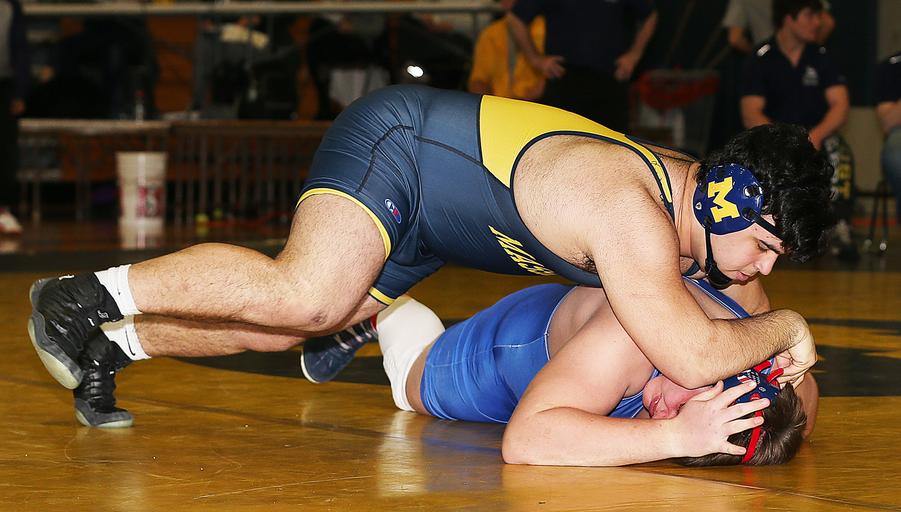 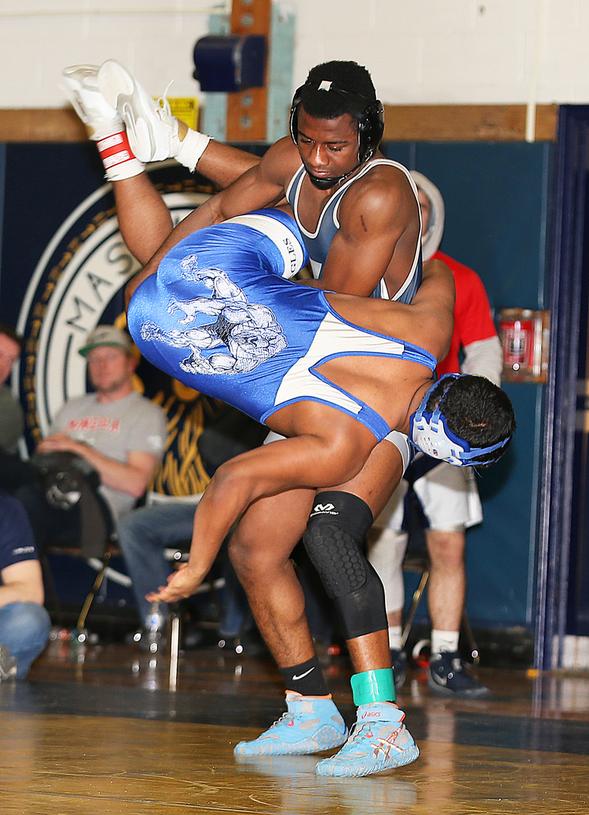 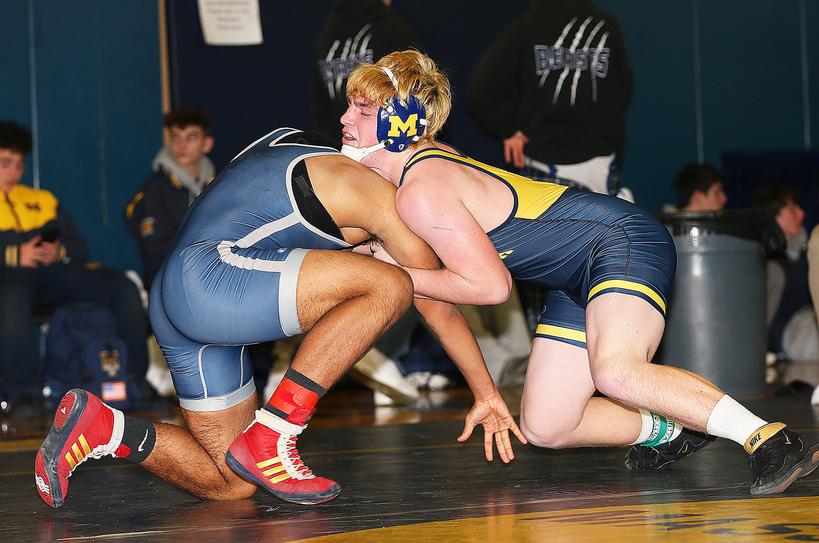 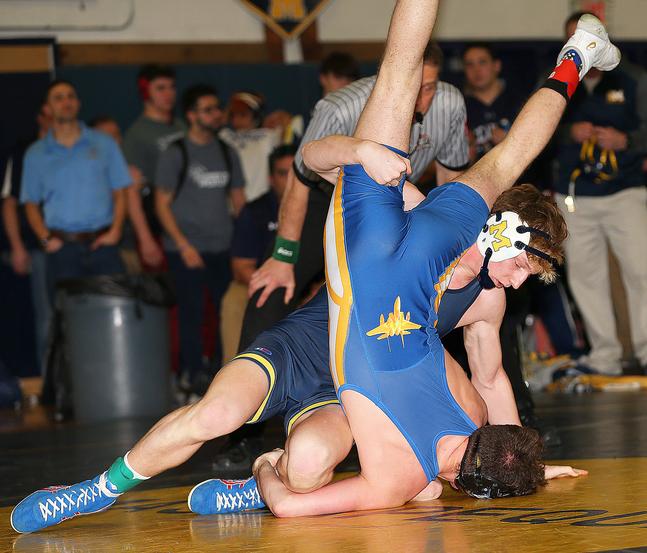 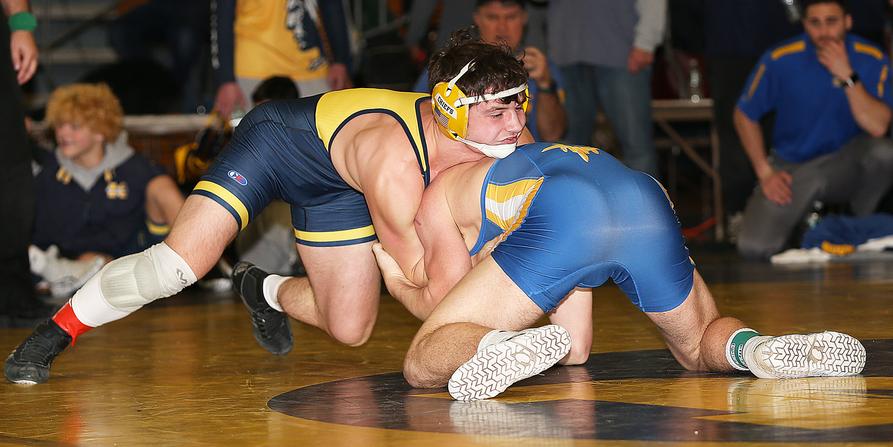 Dan Gibson of Port Washington works for a fall. Gibson won the 145 title.

MASSAPEQUA CROWNS SEVEN CHAMPIONS IN THE FINALS OF THEIR QUALIFIER

MAT NOTES:
Defending Nassau County Champions Massapequa (18-5 dual meet record) pushed 11 wrestlers into the Championship Qualifier Finals and emerged with seven champions, held at Massapequa High School. The Chiefs were paced by All-State matmen junior Chase Liardi (41-3, 156-15 career mark) at 120 who applied a tight bar-arm in the semifinals against Joey Iannaci (Hewlett) for a first period pin and coasted with a 7-1 verdict in the finals against Tyler Schettino (Port Wash), along with and sophomore Anthony Conetta (13-1. 86-4 career), who dropped a hard-fought 11-7 decision to OSW winner Matt Castillo (Port Wash) at 126 pounds in the finals. Eastern States Classic champion and 2018 Division II county champion formerly from Oyster Bay, Sam Khodaparest (37-1) scored with a lightning quick low single leg takedown and applied a tight bar-arm for a fall at the 1:15 mark over Mike Peneski (Port Wash) in the semifinals and posted a solid 5 -2 decision against Jared Gonzalez (Oceanside) in the 285-pound finals. Other Chiefs' champions were: sophomore Carlos Arango (28-9) who posted three falls at 99, Will Piatti (39-9) at 138, top-ranked Jeremy Scutellaro (30-4) who edged all-county CJ Riccobono (27-2) of Sew-East, 3-2, for the 152-pound title, along with junior Dom Casamssina at 170 and Frank Kempton (31-5) at 182 pounds. County bronze medalist junior Dan Gibson (36-2) of Port Washington recorded four falls, including a 44 second pin in the finals and coasted to the 145-pound gold medal. Massapequa head coach Ron Serrano will have the Chiefs ready to defend their Nassau title next weekend at Farmingdale State College and should battle MacArthur and Wantagh for the championship. Special thanks to tournament director Laura Maddock for her expertise and professionalism for running a smooth tournament. 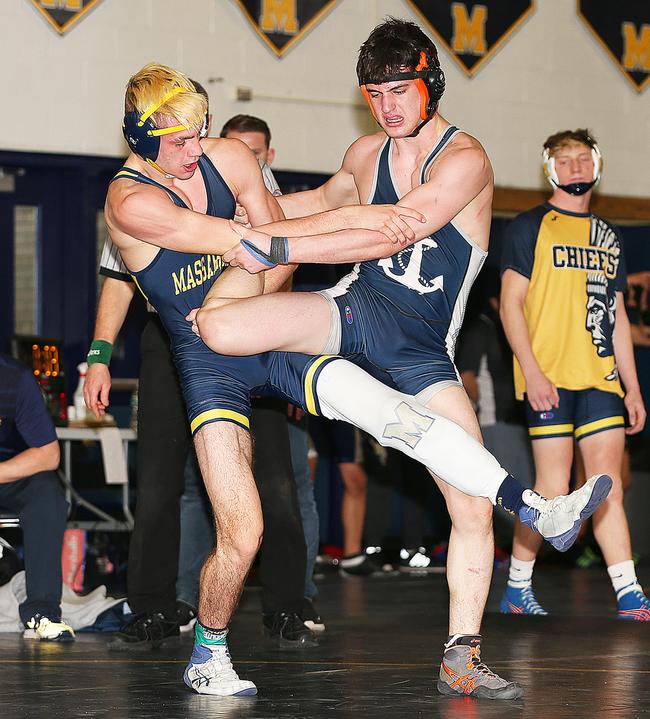 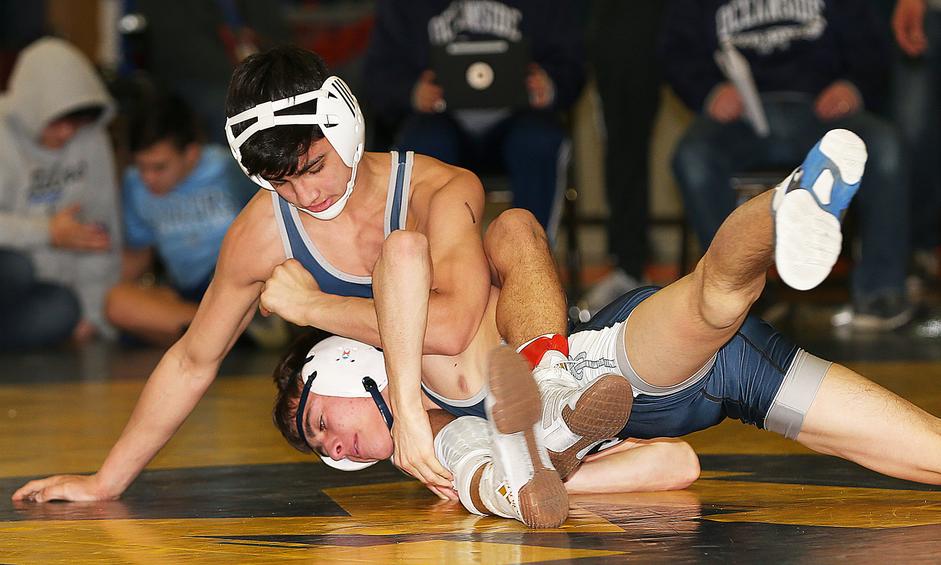 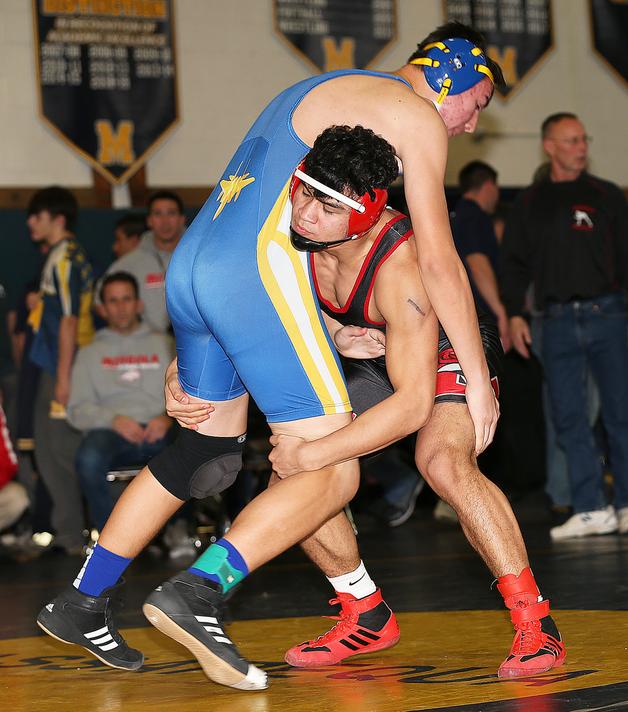 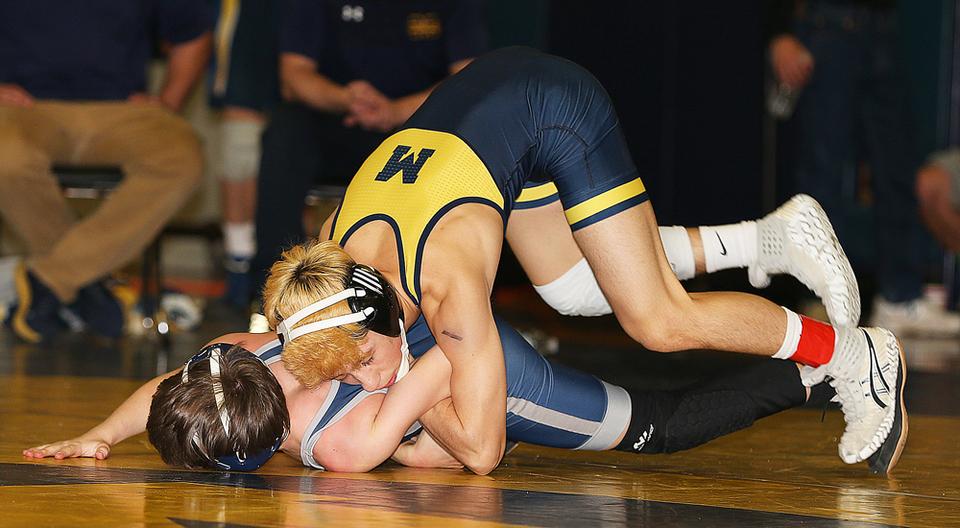 Massapequa's Dan O'Callaghan works for a takedown at 145 pounds. 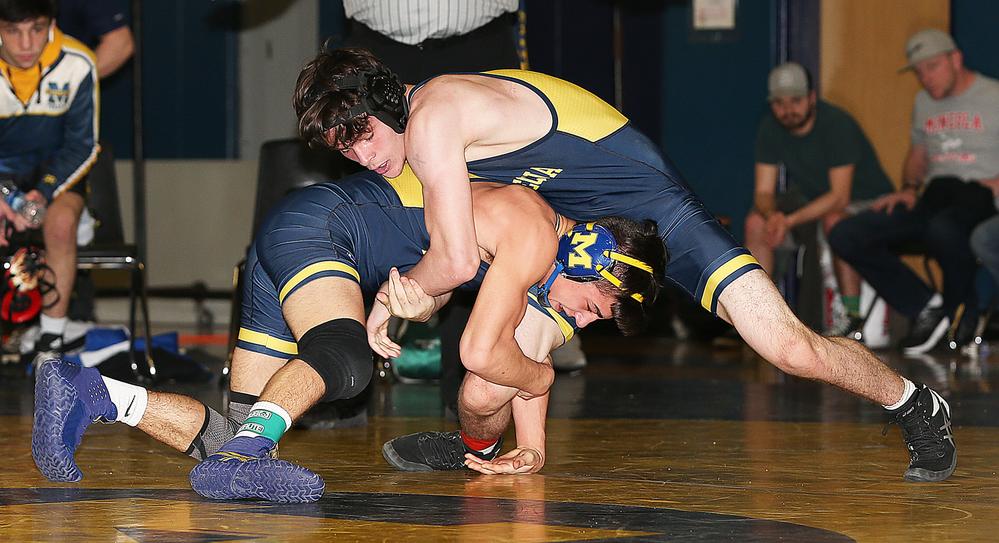 Massapequa's Will Piatti works for a takedown at 138 pounds.

Sam Khodaparast of Massapequa works for a fall en route to winning the 285 pound crown.