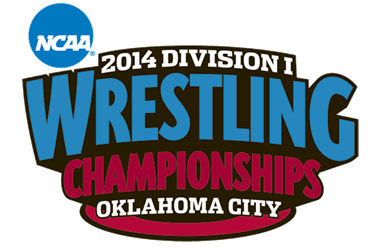 Penn State captured their fourth consecutive NCAA team title at the 84th annual NCAA Wrestling Championships before 16,221 fans at the Chesapeake Energy Center in Oklahoma City, OK. The Nittany Lions tallied 109.5 points and edged Minnesota (104) and Oklahoma State (96.5) in a tight team race that wasn’t decided until the second to last bout in the finals. Penn State was paced by their first ever three-time champion Ed Ruth  (34-1, 136-3 career) whose aggressive leg attacks upended previously unbeaten Jimmy Sheptock (32-1) of Maryland, 7-2, in the 184-pound final and two-time titlist David Taylor (34-0) who posted a solid 6-0 win over Tyler Caldwell (Okla State) at 165. Four-time finalist Taylor (2-1-2-1) finished his illustrious career with a 134-3 mark and a record 53 falls.

In the 125-pound final, Cornell’s Nahshon Garrett (32-2) struck quickly with a blast double and appeared to have the takedown. The call was reversed and scramble specialist Jesse Delgado (30-2) of Illinois converted a scramble takedown into points and eked out a 3-2 win en route to his second NCAA crown. Ohio State’s Logan Stieber (30-1) dominated his opponent with a 10-1 major decision at 141 and became the first Buckeye to claim three NCAA titles.

Mat Notes:
New York State finished with three All-Americans, the aforementiond Gwiazdowski, Stephen Dutton III (13-6) of Michigan who earned 7th at 141 and Cornell’s Brian Realbuto (36-8) who injured his knee in his semifinal bout and defaulted to 6th place at 157 pounds. Penn State now has won five championships, their first NCAA team crown was in 1953. The legacy of the tandem of Taylor and four-time placer Ruth (3-1-1-1) had a combined 270 wins and 6 losses, along with four national team titles, over their stellar careers. Taylor was voted the OSW Award and was the only wrestler to remain unbeaten on the season. Both Penn State and Minnesota finished with seven All-Americans, Okla State had five and the Big Red of Cornell had three AAs. Oklahoma State is the NCAA leader with 34 NCAA team titles and the Cowboys have the most NCAA champions with 138 individual winners. There were 66 teams entered in the NCAA meet and Hofstra finished 40th with 7 points, followed by Binghamton (49th with 4.5), Army (50th with 4) and Columbia (51st with 3.5). The combined record of the ten Division I champions was 335 victories and 15 losses. The total attendance for all six sessions was 93,334 true wrestling fans. The 2015 NCAA Championships will be held at the Scottrade Center in St. Louis, Missouri on March 19th through the 21st.