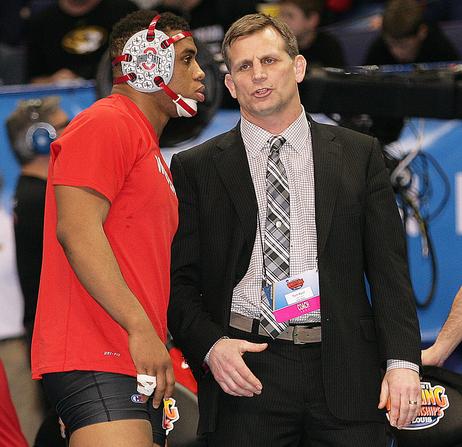 finishes of 6th and 2nd. The Big Red landed in 5th place with 71.5 points and added two more AAs to their ledger, junior Nahshon Garrett (3-2-5) at 125 and Chris Villalonga (6th at 149).  Gabe Dean had the most wins in the NCAA this year with 44. PA led all states with a total of 13 All-Americans. Ohio State started their wrestling program in 1921, now the 94-year wait is over for the Buckeyes and head coach Tommy Ryan (Wantagh HS), now in his 9th year at the helm. Four-time titlist Logan Stieber had a perfect 20-0 record in NCAA tournament competition and was asked about the journey to the team title with coach Ryan. He stated: "It's been great. Coach Ryan is a great leader. He puts us all in position to do well. I couldn't be more thankful for him being in my life." Stieber joins the elite group of four-time NCAA champions; Pat Smith (Oklahoma State), Cael Sanderson (Iowa State) and recently Cornell's Kyle Dake (Lansing HS).

Oklahoma State is the NCAA leader with 34 NCAA team titles and the Cowboys have the most NCAA champions with 139 individual winners. Iowa is second with  23 NCAA mat titles and finished with six All-Americans at the 2015 NCAA meet, tops amongst the field of the 69 teams. Hofstra had eight points, Army (2.5) and both Binghamton and Columbia finished with one point. Kyven Gadson (90-11 career) is the son of the late Willie Gadson, a Huntington HS star, a NJCAA champ and a two-time All-American at Iowa State in 1975-76. Only four wrestlers remained unscathed on the season, Stieber, Martinez, Dieringer and Gwiazdowski. The combined record of the ten Division I champions was 326 victories and only 12 losses. The total attendance for all six sessions was a NCAA record of 113, 013 true wrestling fans, eclipsing the previous mark of 112, 393, set at the 2012 NCAAs in St. Louis. The 2016 NCAA Division I Wrestling Championships will be held at Madison Square Garden, NYC, on March 17th-19th.

Ohio State  won their first-ever NCAA team title at the 85th annual NCAA Wrestling Championships before 19,715 fans at the Scottrade Center in St. Louis, Missouri. The Buckeyes tallied 102 points and finished ahead of perennial power Iowa (84) and Edinboro (75.5). They were led by four-time champion Logan Stieber (29-0, 119-3) and teammate Nathan Tomasello (33-4) who won the 125-pound class. Stieber rolled through the 141-pound bracket and was voted the MOW of the tournament. Reigning NCAA champions that successfully defended their titles were tough Alex Dieringer (34-0) of Oklahoma State at 165 and New York native Nick Gwiazdowski (35-0) of North Carolina State. Gwiazdowski scored with his blast double leg takedowns and defeated Michigan's Adam Coon, 7-6, to claim the 285-pound crown.

Cornell's Gabe Dean (44-2) posted a solid 6-2 verdict in the finals to win the gold medal at 184 and teammate Brian Realbuto was defeated by red-shirt freshman Isaiah Martinez (34-0) of Illinois, who used a barrage of takedowns for a 10-2 major decision en route to the 157-pound title. Also winning NCAA crowns were Oklahoma's Cody Brewer (22-1) whose aggressive style held off Cory Clark (Iowa), 11-8,  at 133, Drake Houdashelt (36-1) of host Missouri, who scored with a quick double leg takedown and emerged with a 3-1 overtime win at 149, Matt Brown (29-3) of Penn State who rallied with a late stalling call and clasped hands to eke out a 5-4 decision at 174, along with Kyven Gadson (30-1) of Iowa State. Gadson countered a takedown attempt by Ohio State's Kyle Snyder and hip tossed him to the mat using his "Gadson" for an electrifying fall at the 4:24 mark of their 197-pound bout. 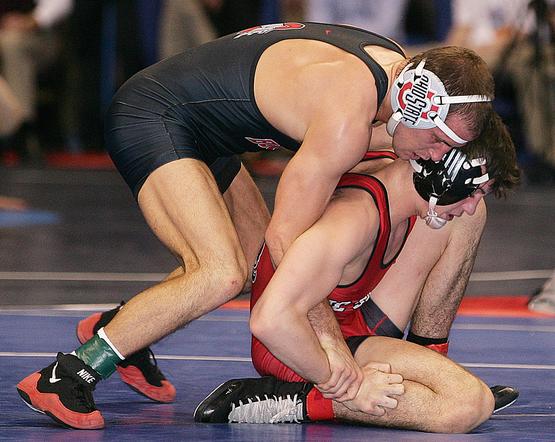 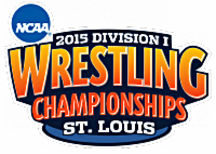