Gable Steveson (Olympic Gold Medalist) does his traditional back flip after winning his third NCAA title. He finished with a remarkable 90-2 career record.

MAT NOTES:
There were 330 elite wrestler entered into the 91st edition of the NCAA Division I Wrestling Championships. There were 65 returning All-Americans in the tournament, including 11 NCAA champions.

Penn State won their ninth title in eleven years before 18,164 fans at the Little Caesars Arena in Detroit, Michigan. The Nittany Lions tallied 131.5 points and tied a NCAA record by crowning five national champions, set by Iowa twice, in 1986 and 1987, along with Oklahoma State (2005) and Penn State in 2017. Winning titles for Penn State were; Roman Bravo-Young (22-0), Nick Lee (22-0), Carter Starocci (23-0), Aaron Brooks (21-1) and Cornell transfer Max Dean (23-1) at 197 pounds. Starocci (Erie, PA) claimed his second NCAA crown by edging 2019 champion and MOW winner Mekhi Lewis (Virginia Tech) in a back-and-forth exciting bout that featured an exchanged of some slick takedowns. At the end of regulation the match was knotted at 5-5. In the overtime period, Starocci won by accumulating a mere 15 seconds riding time advantage and the gold medal.

Cornell's three-time NCAA titlist Yianni Diakomihalis (28-0, 94-1 career) has won 75 consecutive matches and became the 50th three-time NCAA champion. Diakomihalis posted five victories enroute to the 149-pound crown, including a methodical display of takedowns against Ridge Lovett (Nebraska) via a solid 11-5 decision. Diakomihalis has become the model of efficiency and seems to elevate his wrestling prowess year after year. He is a true student of the sport and  commented, "I am always trying to improve and stay ahead of my opponents." He added, "I train the right way and try to wrestle the first minute of my match the same as the last minute." The Big Red landed in 7th place and now have 69 All-Americans in their storied program. Also earning All-American accolades were sophomores; two-time AA Vito Arujau (19-2) who earned the bronze medal at 125 and Jonathan Loew (30-8) at 184 pounds.

The Empire State had four All-Americans, as Arizona State sophomore  Jacori Teemer (22-3) finished in sixth place at 157 pounds and claimed his second NCAA award. Once again, PA led all home states with an remarkable12 All-Americans.

Other champions included: Nick Soriano (16-0) of Michigan at 125, rugged Ryan Deakin (18-0) of Northwestern at 157 and versatile second year freshman Keegan O'Toole (25-0), a four-time Wisconsin state champion, now at Missouri who won the loaded 165-pound bracket. The OSW Award was earned by Minnesota's Gable Steveson (18-0, 90-2 career mark) who rolled through the 285-pound weight class. The venerable Steveson, a four-time Minnesota state champion, performed his traditional back flip after winning his third NCAA title. His returning to the NCAA landscape this season and his dedication to amateur wrestling is a true credit to his outstanding character. He will always be regarded as the USA's all-time top heavyweight.

The combined record of the ten Division I champions was an impressive 216 victories and only 2 losses. The total six-session attendance was 106,097 loyal wrestling fans. The 2023 NCAA Championships will be held at the BOK Center in Tulsa, Oklahoma, on March 16th - March 18th.

Ryan Deakin of Northwestern reverses Quincy Monday of Princeton to win at 165 pounds. 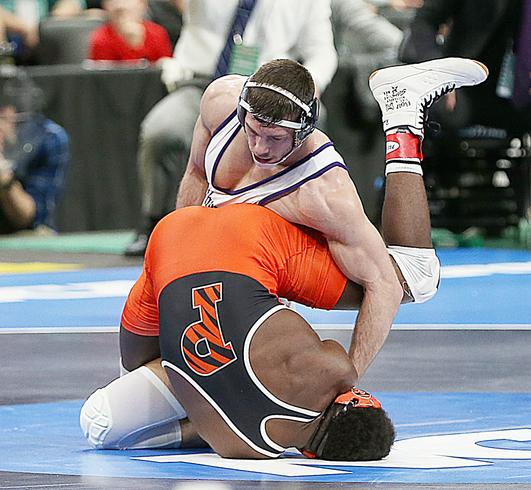 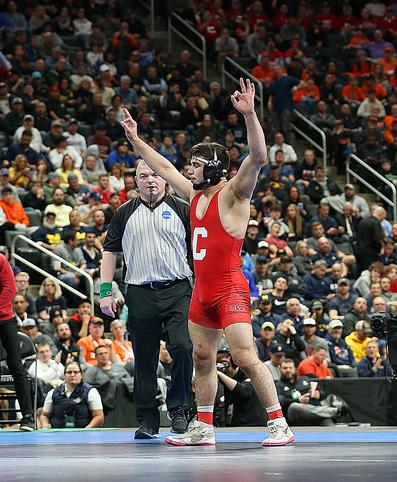 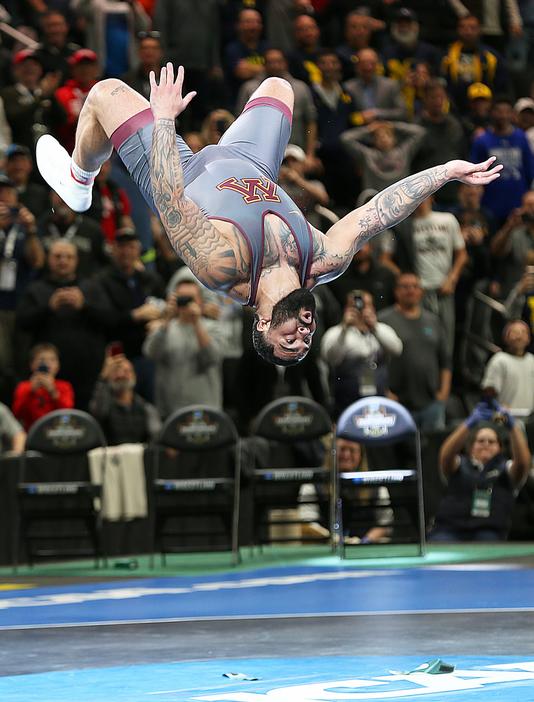 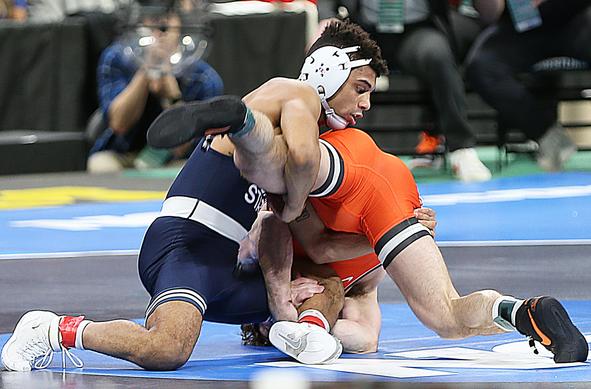 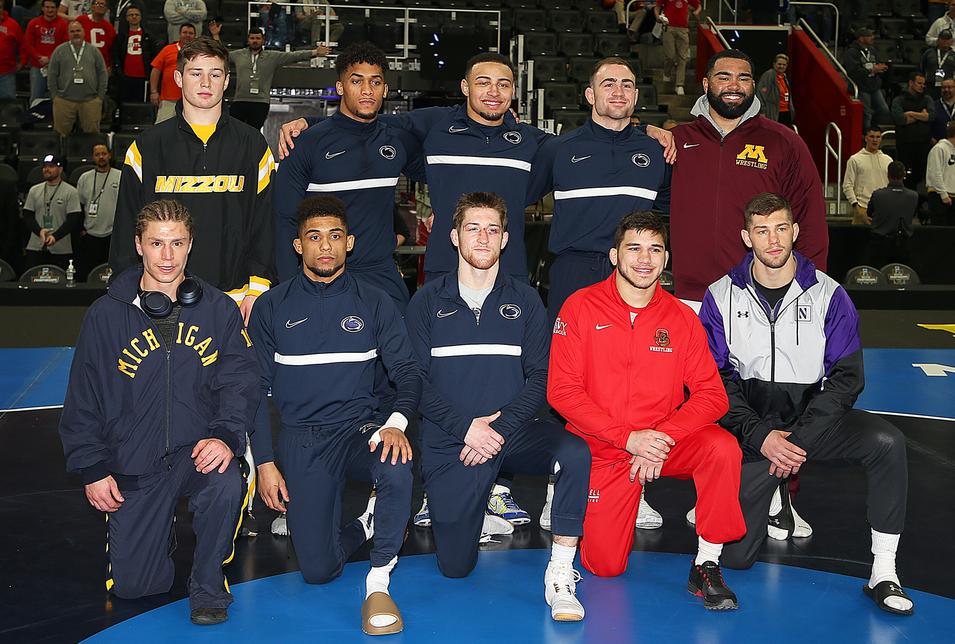 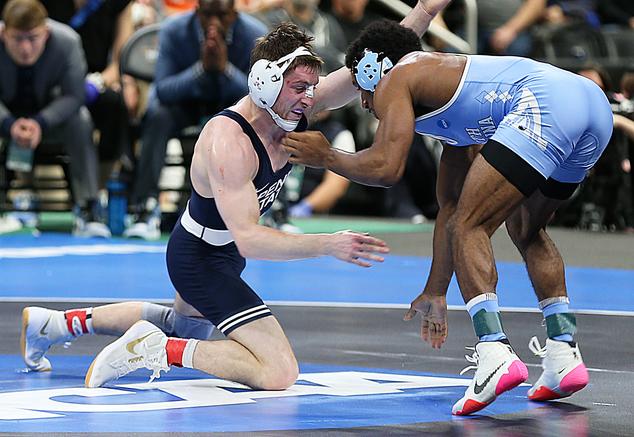 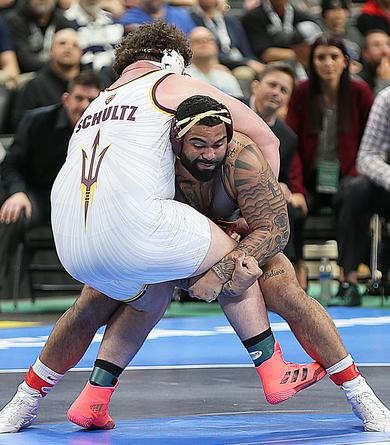 Penn State tied the record for most NCAA champions in a single year with five. They share the record with Iowa who set it twice in 1986 and 1987. The 5 Nittany Lions (left to right): Roman Bravo-Young, Nick Lee, Carter Starocci, Aaron Brooks and Max Dean.

In a battle of NCAA champs Penn State's Carter Starocci on the attack here came out on top defeating Virgina Tech's Mekhi Lewis at 174 pounds. 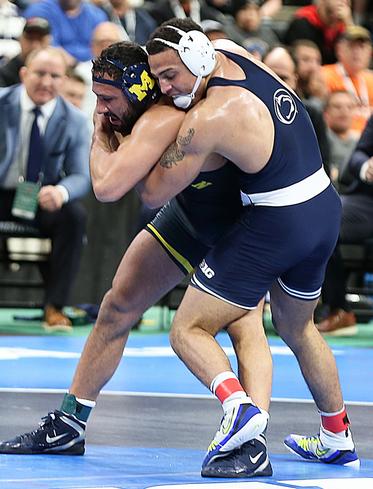 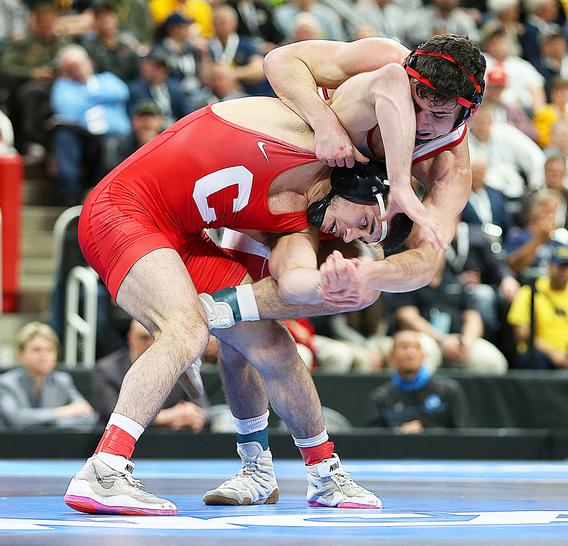 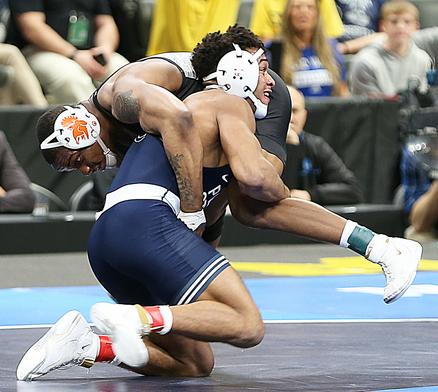 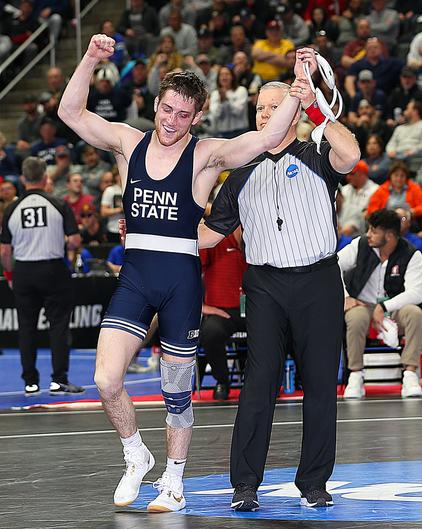 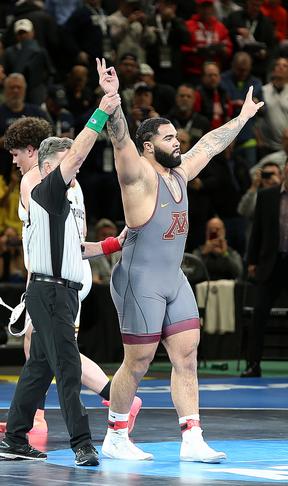 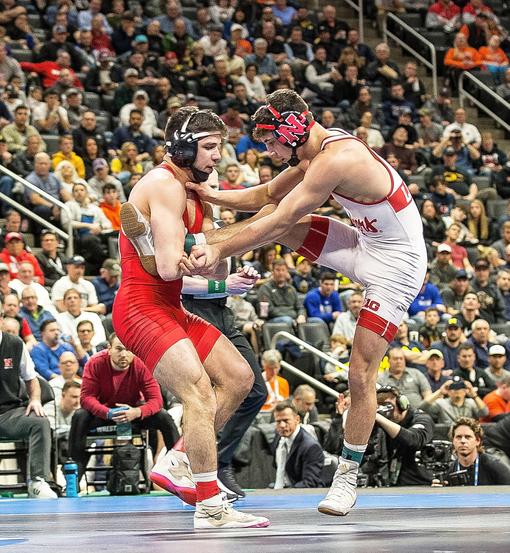 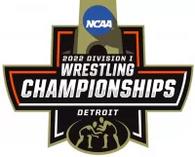 Gable Steveson of Minnesota works for a takedown on Arizona State's Colton Schultz and celebrates winning his third NCAA title.