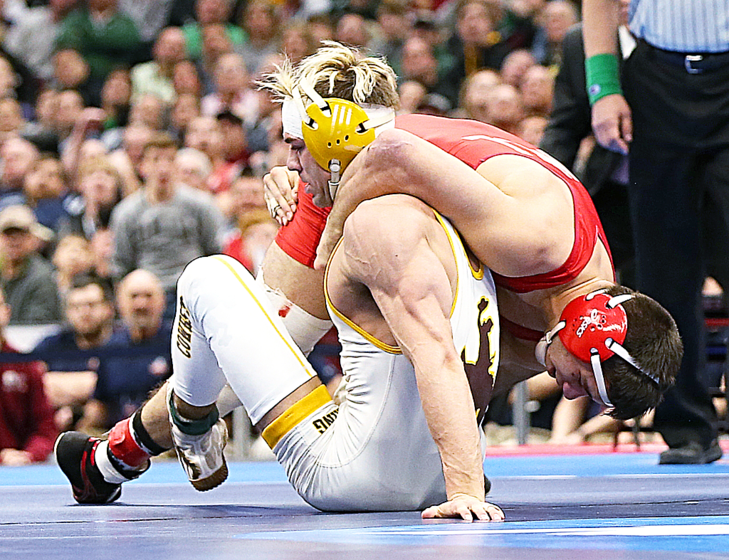 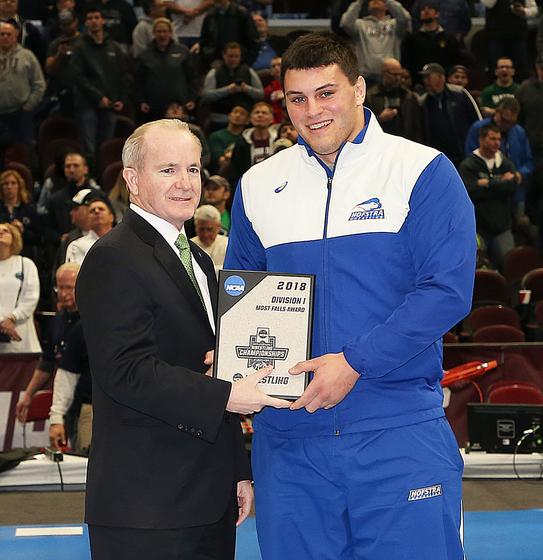 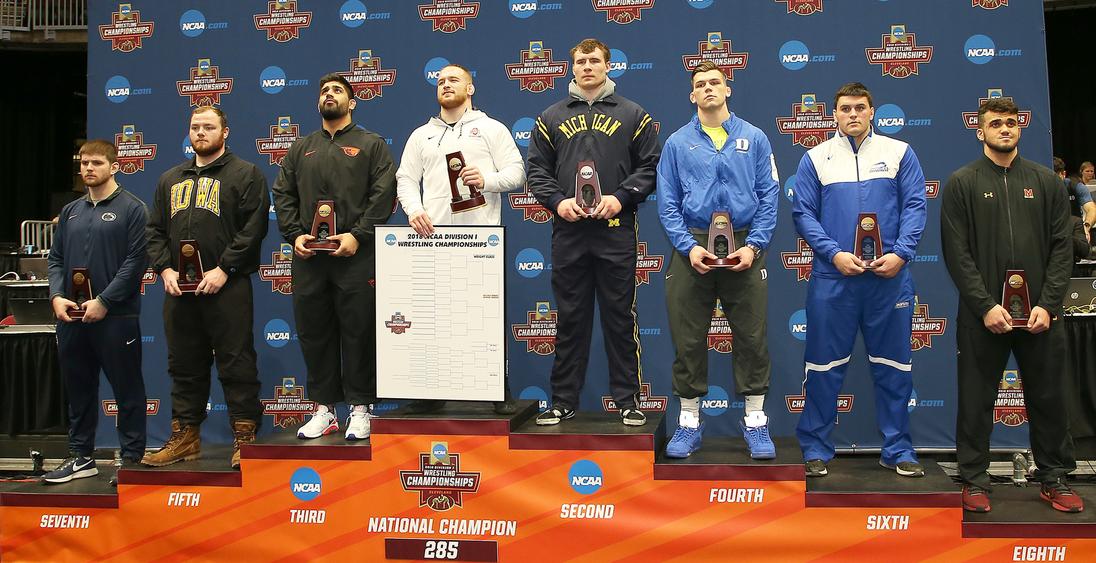 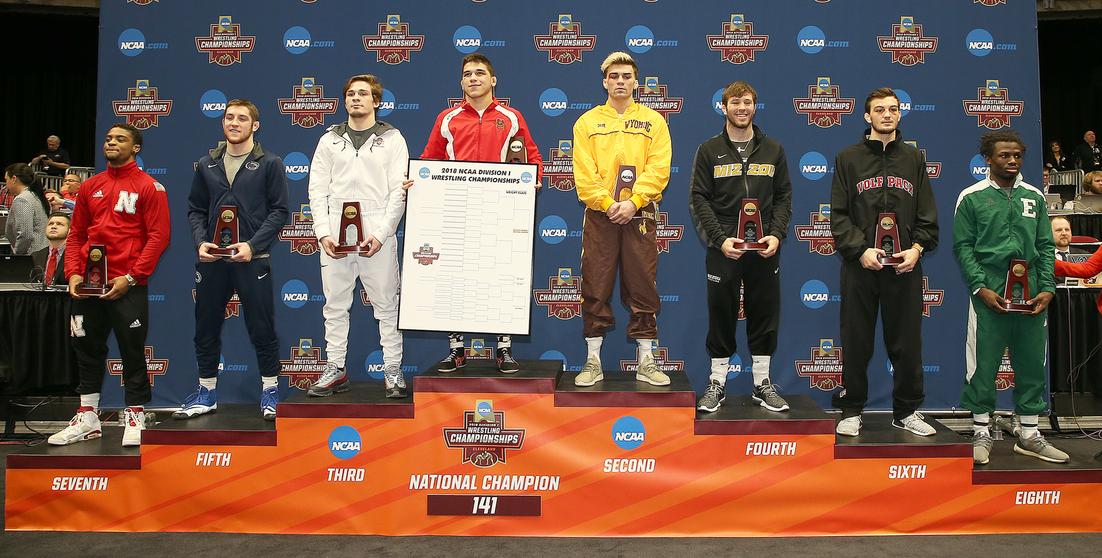 Penn State won their seventh title in eight years at the 88th annual NCAA Wrestling Championships before 19,776 fans at the Quicken Loans Arena in Cleveland, Ohio. The Nittany Lions tallied 141.5 points to edge Big Ten champion Ohio State who finished with 134.5 points and crowned four champions. Two-time champion and Texas native Bo Nickal (31-0), countered a Myles Martin (Ohio State) blast double and near fall with a stunning roll reversal and flattened him at the 2:30 mark of their 184-pound pivotal bout and clinched the team title. The Nittany Lions were also paced by three-time titlist Zain Retherford (31-0,126-3 career), Jason Nolf (26-1) and Vincenzo Joseph (25-2) who defeated two-time winner Isaiah Martinez (18-1,116-3 ) of Illinois.

Ohio State finished as runners-up and were paced by three-time winner Kyle Snyder (17-1,94-5), amongst their eight All-Americans. Finishing in third place was Iowa (97) and true freshman Spencer Lee (22-2) captured the talented 125-pound class. Other NCAA winners were: Seth Gross (29-1) who hails from Minnesota, became South Dakota State's first NCAA champion, sophomore Zahid Valencia (32-0) and Michael Macchiavello (27-4) at 197. Valencia, a three-time California state champion, dominated the loaded the 174-pound bracket, and in the finals he scored with his relentless single leg takedowns against defending NCAA champ Mark Hall and posted a solid 8-2 victory.

Cornell had an impressive tournament as they finished in 7th place and emerged with four wrestlers who earned AA honors, including a 20th national champion. Yianni Diakomihalis (34-1), a well-poised true freshman edged two-time champ Dean Heil (Okla State) in the quarterfinals, scored an exciting overtime victory in the semi-finals and rallied against senior Bryce Meredith in the gold medal match. In that bout, he escaped and scored with a crucial single leg takedown and clamped on an overhead cradle in the last 45 seconds of the third period for a dramatic 7-4 victory. Diakomihalis, when asked how he maintained his composure throughout the championship bout replied: "It's all about belief, in my opinion. I know my coaches have infinite confidence in me and when I step out there I have a lot of scoring potential. So it's all just coming from that confidence that no matter what situation your're in, you can get one.  So you should never have fear if you believe in yourself."

New York State finished with four All-Americans; the aforementioned Diakomihalis, a four-time state champion, Shakur Rasheed ( 24-5) of Penn State, 7th at 197, along with a pair of 285-pounders: Michael Hughes (39-6) of Hofstra who finished in 6th place and Maryland's Youssif Hemida (30-8) who placed 8th. Hughes (115-47) won the NCAA Award for Most Falls in the season with 18 pins. The Pride landed in 28th place with 12 points amongst the 65-team field. The state with the most NCAA qualifiers was Pennsylvania with 53, the Keystone State also had the most All-Americans with 15, followed by Ohio (11) and NJ (8). The Big Red of Cornell return four All-Americans next season, along with 2017 AA Brandon Womack at 174. Only three NCAA wrestlers remained unscathed on the season: Retherford, Valencia and Nickal. Retherford, a four-time All-American (5-1-1-1) and team leader for the Nittany Lions finished his illustrious career with a 94-match win streak. The combined record of the ten Division I champions was 269 victories and only 11 losses. The finals set a single session attendance record and the totals for the six sessions was 113,743 fans. The 2019 NCAA Division I Championships will be held at the PPG Paints Arena in Pittsburgh, PA, on March 21st-23rd. 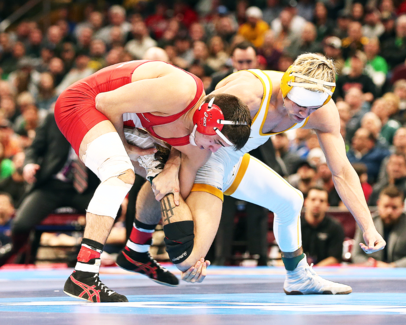 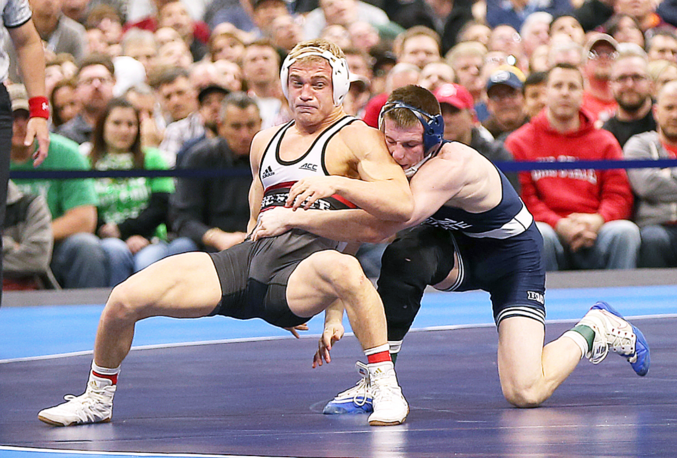 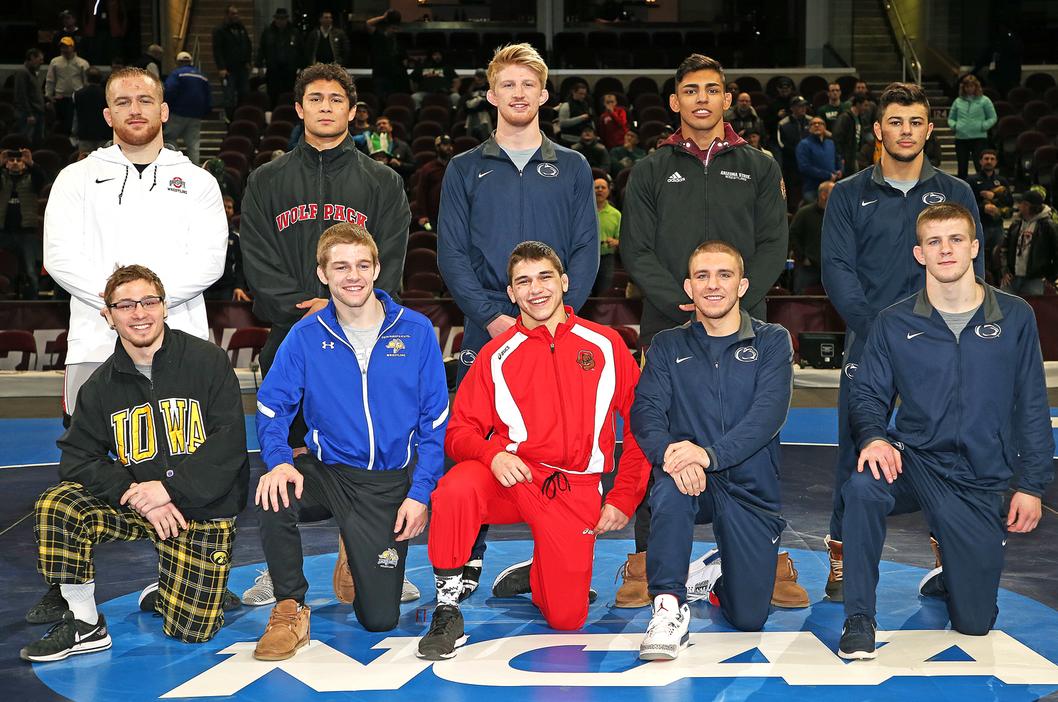 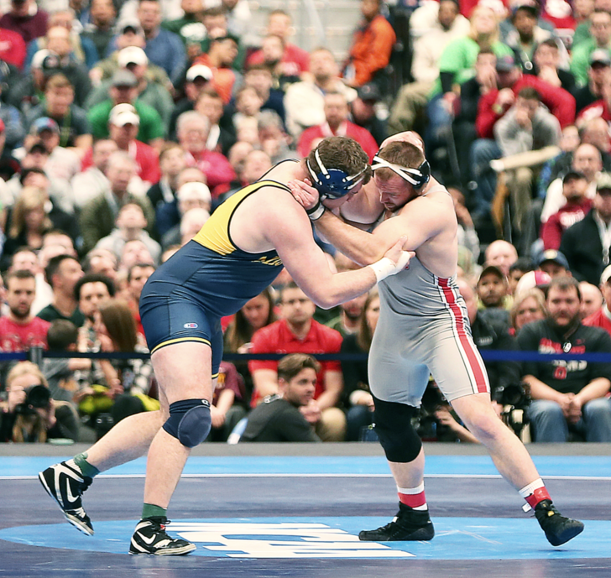 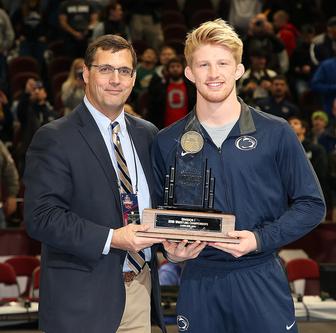 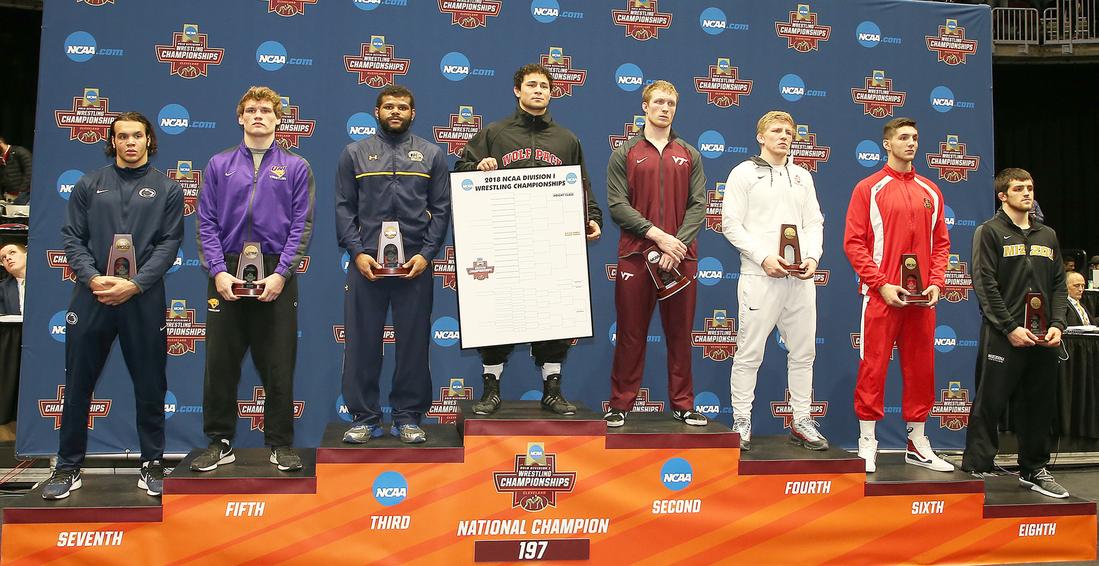 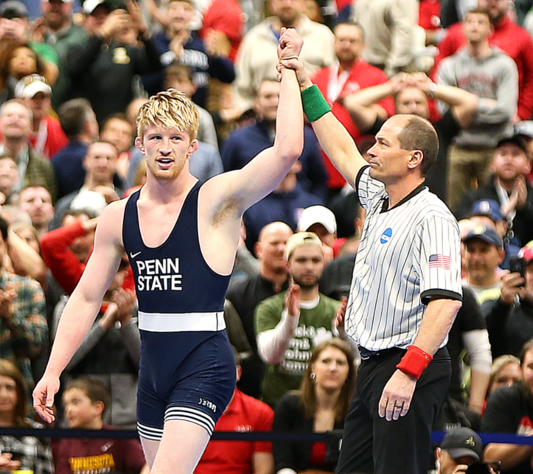 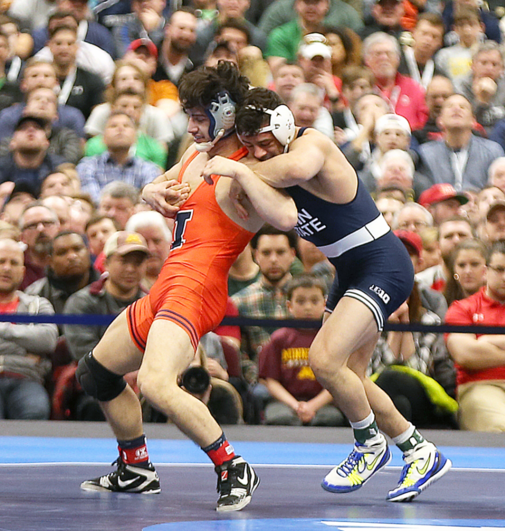 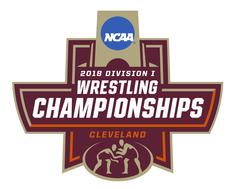 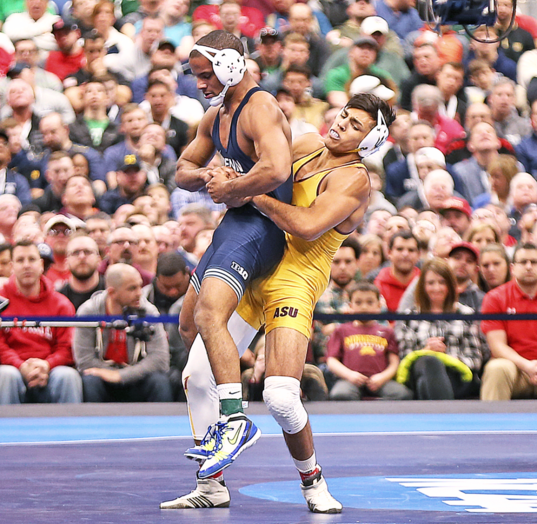 Michael Hughes from Hofstra receives the Most Pins in a Season Award. 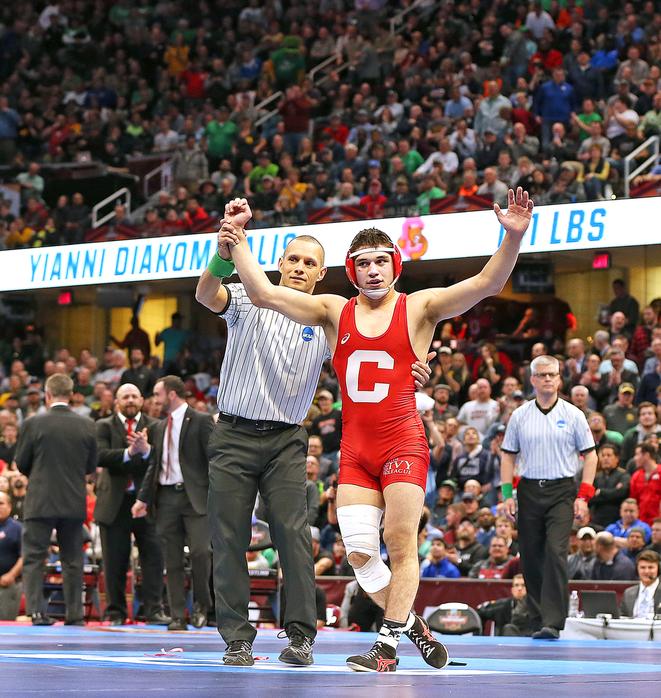 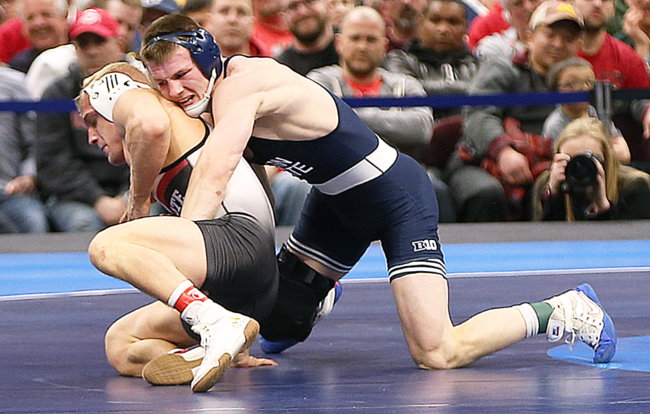