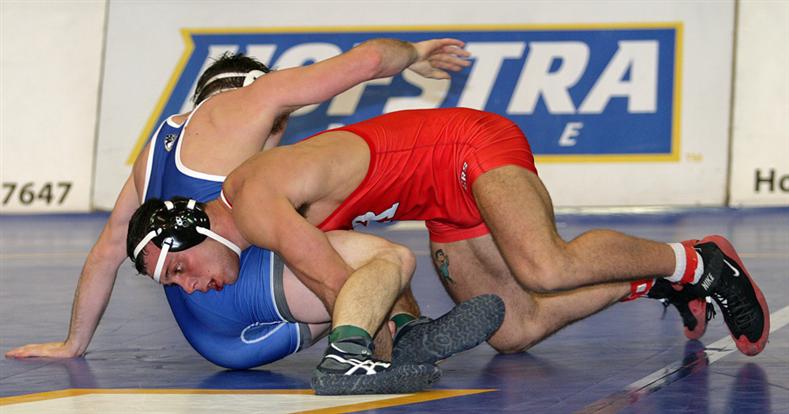 Uniondale-Rutgers edged Hofstra on most falls criteria in the season opener. The Pride had opened up a nice 14-3 lead with Joe Booth's decision at 165 pounds.  Luke Vaith started the dual meet with an 18-3 technical fall at 141 pounds and was followed by an exciting bar arm pin from Cody Ruggirello. The Scarlet Knights of Rutgers answered back after the break with four consectutive wins including two falls. Hofstra's Jamie Franco closed the gap with a 5-1 win at 125 which put the Pride within 4 points. In a battle of Long Islanders it was Hofstra's Jamel Hudson (St. Anthony's HS) taking down Rutger's Sean McCabe (Connetquot HS) enroute to a 16-5 major decision to tie the team score at 21, but Rutgers was awarded the tie breaker point for the two falls to take the match 22-21.

Mat Notes...
Both squads won five bouts, but the difference in the dual was the two falls recorded by Rutgers. Hofstra embarks on its 67th wrestling season and its first as an EIWA member.The Pride has 16 duals scheduled for the 2013-14 season. Head coch Rob Anspach is now in his 3rd year at the helm and his 12th overall. The match at 133 pounds featuredtwo former NYS champions, red shirt freshman Jamel Hudson (St. Anthony's) used a barrage of takedowns to defeat 2013 winner Sean McCabe (Connetquot HS) en route to a major decision. Rutgers and Hofstra have met 22 times and the Scarlet Knights hold a 12-9-1 series edge. The last time the Pride defeated Rutgers was in January 2012 with a 26-10 win.
The Pride's next opponent will be the 8th-ranked Virginia Tech Hokies on November 8th in Virginia.